Groundwater attracts insufficient management attention compared to more visible surface water resources in rivers and reservoirs and is often poorly monitored. This is particularly the case in regions under water stress where groundwater is used as an additional water source. We suggest an alternative and/or complementary approach for monitoring groundwater changes using seismic data. Using a 23-year continuous broadband record and two independent single-station techniques - ambient noise autocorrelation and receiver functions - we document a relationship between subsurface seismic response and groundwater levels (GWLs) in the Gulf Coast Aquifer System of southern Texas. Using a simple physical model, we show that GWL changes affect P-(Vp) more strongly than S-wave(Vs) velocities, consistent with our observations as well as previous studies based on inter-station methods. Due to their sensitivity to Vp, single-station techniques respond more strongly to groundwater changes, making them useful for characterizing and monitoring aquifer systems. Click to download the research paper. 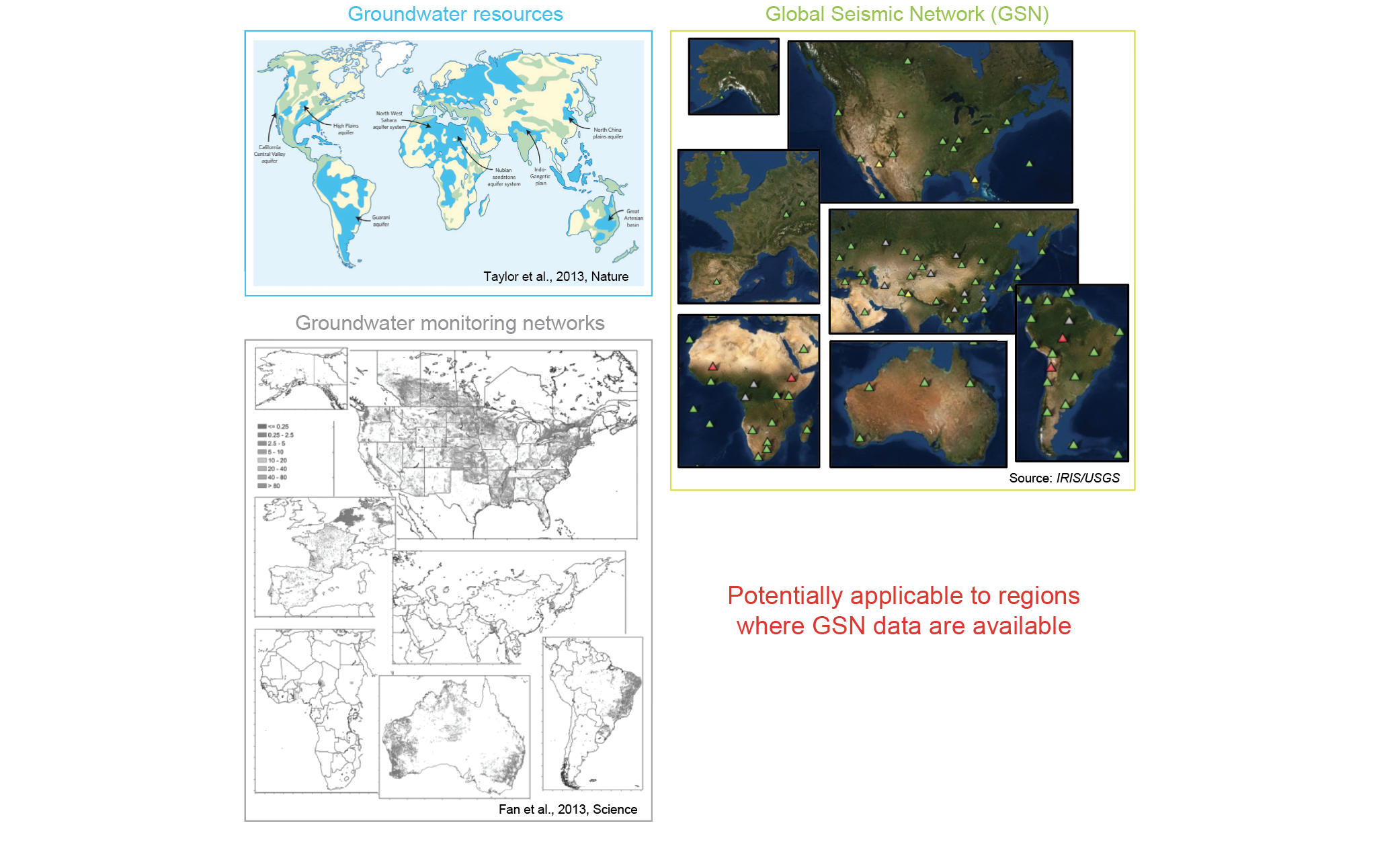 How Can We Monitor Groundwater Level Using Seismic Data?

Both ambient noise and teleseismic receiver functions (RF) are computed from broadband recordings spanning 1995–2017 at IU.HKT station in Harris County, Texas installed above the Gulf Coast Aquifer System (GCAS) of southern Texas. To detect seismic velocity changes, we compute autocorrelations of ambient noise signals at the seismic station and measure perturbations in subsurface velocity (dv/v). Small velocity perturbations delay or advance correlations in time and decorrelate them from the reference state; we measure the stretching coefficient (dv/v) that compensates the time delay (−dt/t) to maximize the correlation with the reference state of the system. In addition to ambient noise correlations, we use an independent, complementary method based on analyzing teleseismic waveforms to isolate waves scattered/converted directly beneath the receiver. This method, called RFs are computed using a total of 829 teleseismic earthquakes that repeatedly illuminate the same volume of crustal aquifer system quasi-continuously. We analyze the spectrograms of RFs and exploit both amplitude and phase information of subsurface scattering/conversions contained in the RFs spectra. 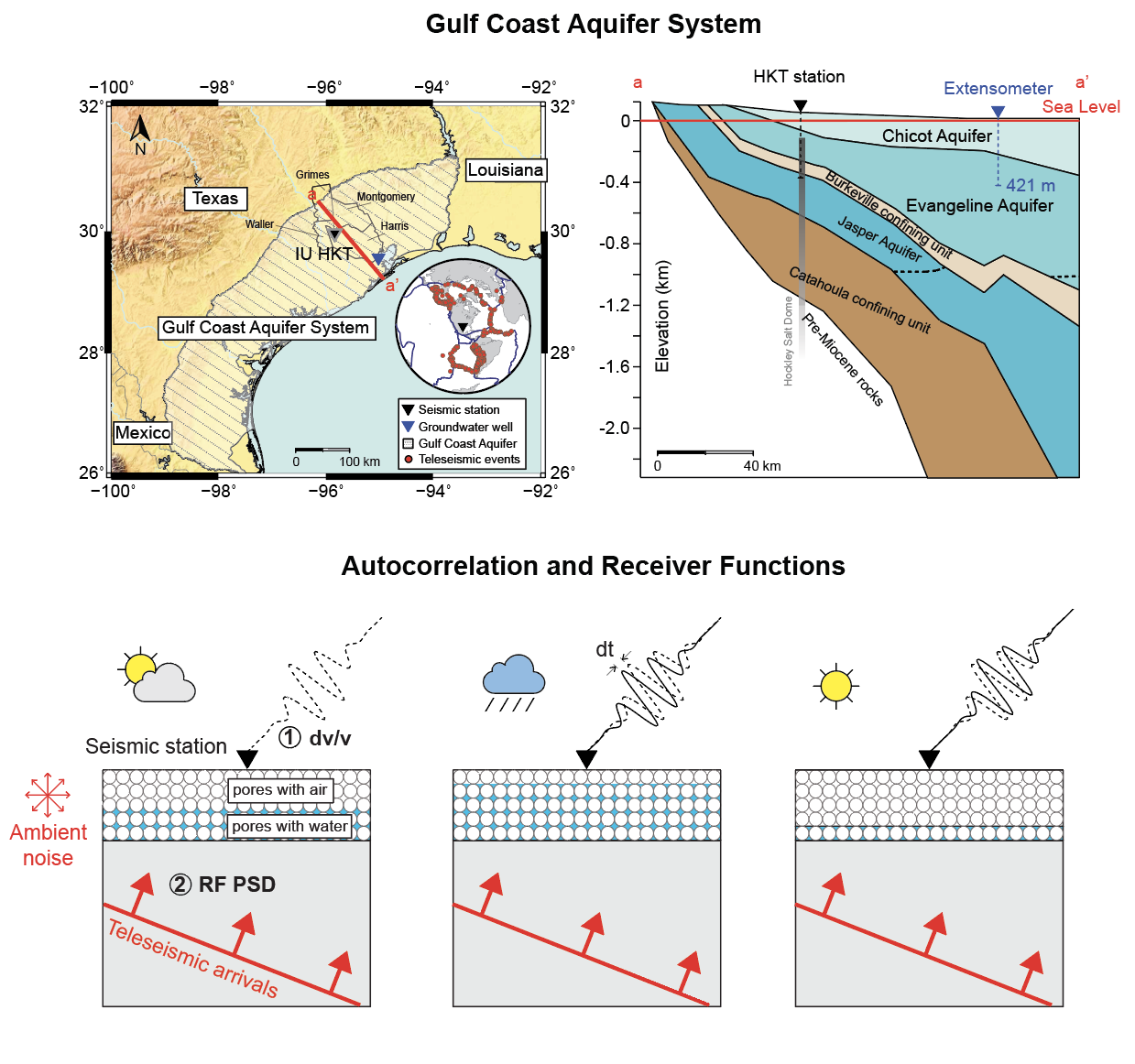 The largest increase in dv/v of 1.2% occurs during 2008–2010 (red line, Figures 3a and 3c). The strongest correlation between the two seismic measurements is found in the 0.26–0.3 Hz frequency range. We find that the GWL and averaged dv/v track each other, with the GWL also reaching its maximum in the same 2008–2010 period. Moreover, GWL and PSD of RFs also correlate, with strongest correlation in the 0.67–0.71 Hz frequency range. The strong distinctive peak in GWL observed during 2008–2010, in particular, is consistent with the median PSD of RFs from this frequency range. While abrupt changes in dv/v amplitudes have been reported after nearby earthquakes elsewhere, the tectonic stability of the study area and paucity of seismicity makes such an explanation highly unlikely. Instead, we attribute the sudden increase observed in both dv/v and PSD of RFs to three consecutive hurricanes (i.e., Gustav, Ike, and Norbert) that occurred less than a month apart prior to the observed peak during 2008–2010. Substantially lower correlation coefficients from both horizontal component measurements suggest the primary role of P‐wave velocity changes. 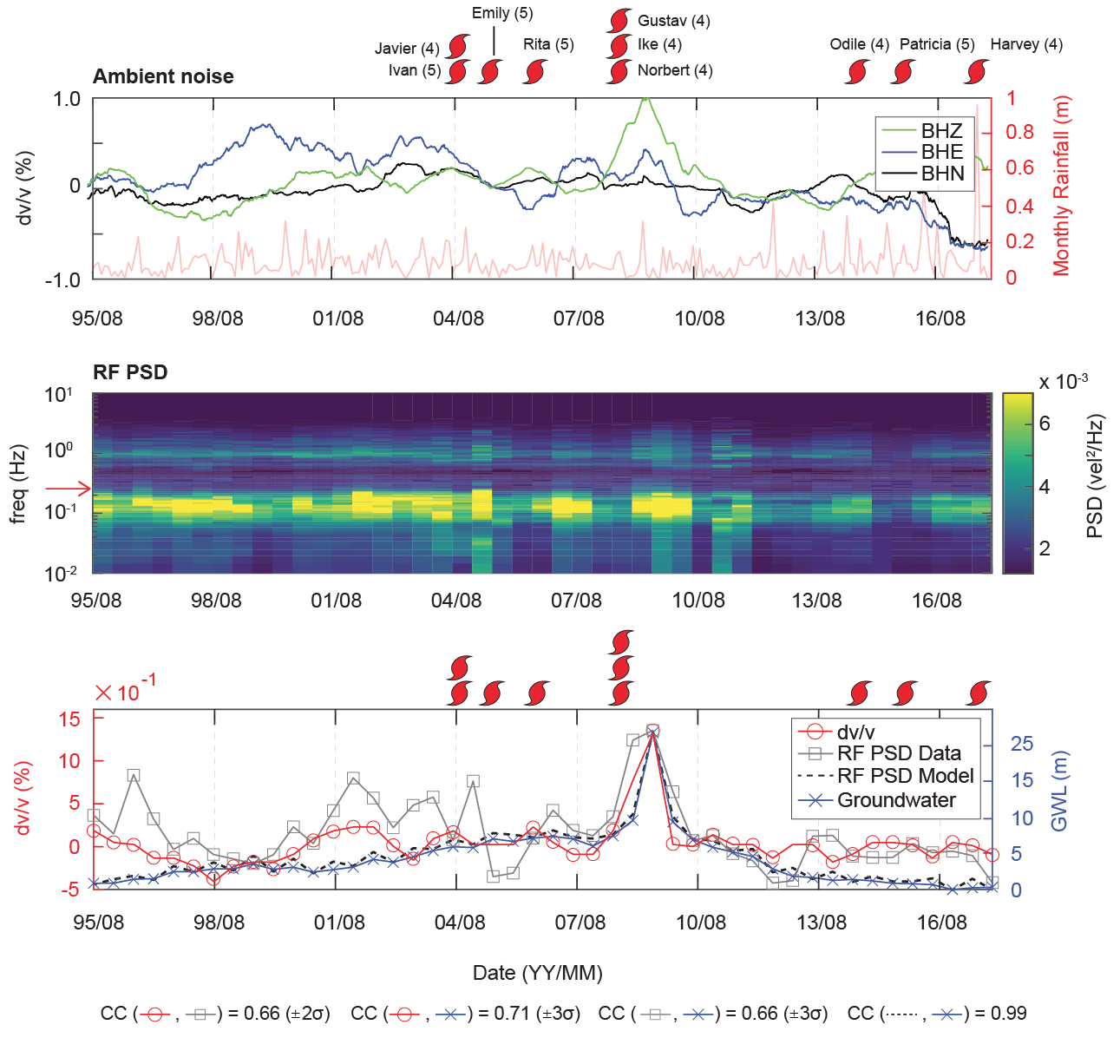 A Simple Physical Model with Synethics

To relate GWL to changes in the seismic response of the subsurface, we construct a simple physical model. The model aquifer contains the uppermost 500m layer having an effective porosity of 0.23. To relate the effective elastic moduli of the aquifer to the properties of its constituents (e.g., a simplest model with porous aquifer rock, air, and water), we use the fluid substitution approach of aquifer rock and the pores with water and air, varying the water level from 0 to 500m (capturing both high and low GWL scenarios for the GCAS). GWL changes induce correlated changes in Vp, but anticorrelated, much smaller‐amplitude changes in VS, regardless of the assumed porosity. Note that the actual data shown in Figure 3 are sensitive to GWL changes on the order of 15 m and the corresponding prediction for Vp and Vs changes are on the order of 1 and 0.1%, respectively. Our simple physical model predicts that GWL increase should decrease Vs, though the relative change in Vs is lesser by a factor of 10 than that in Vp. This is indeed what has been observed elsewhere in CA. Differences in velocity variations inferred by autocorrelation of horizontal versus vertical component also support the higher sensitivity of Vp to GWL changes, compared to Vs. 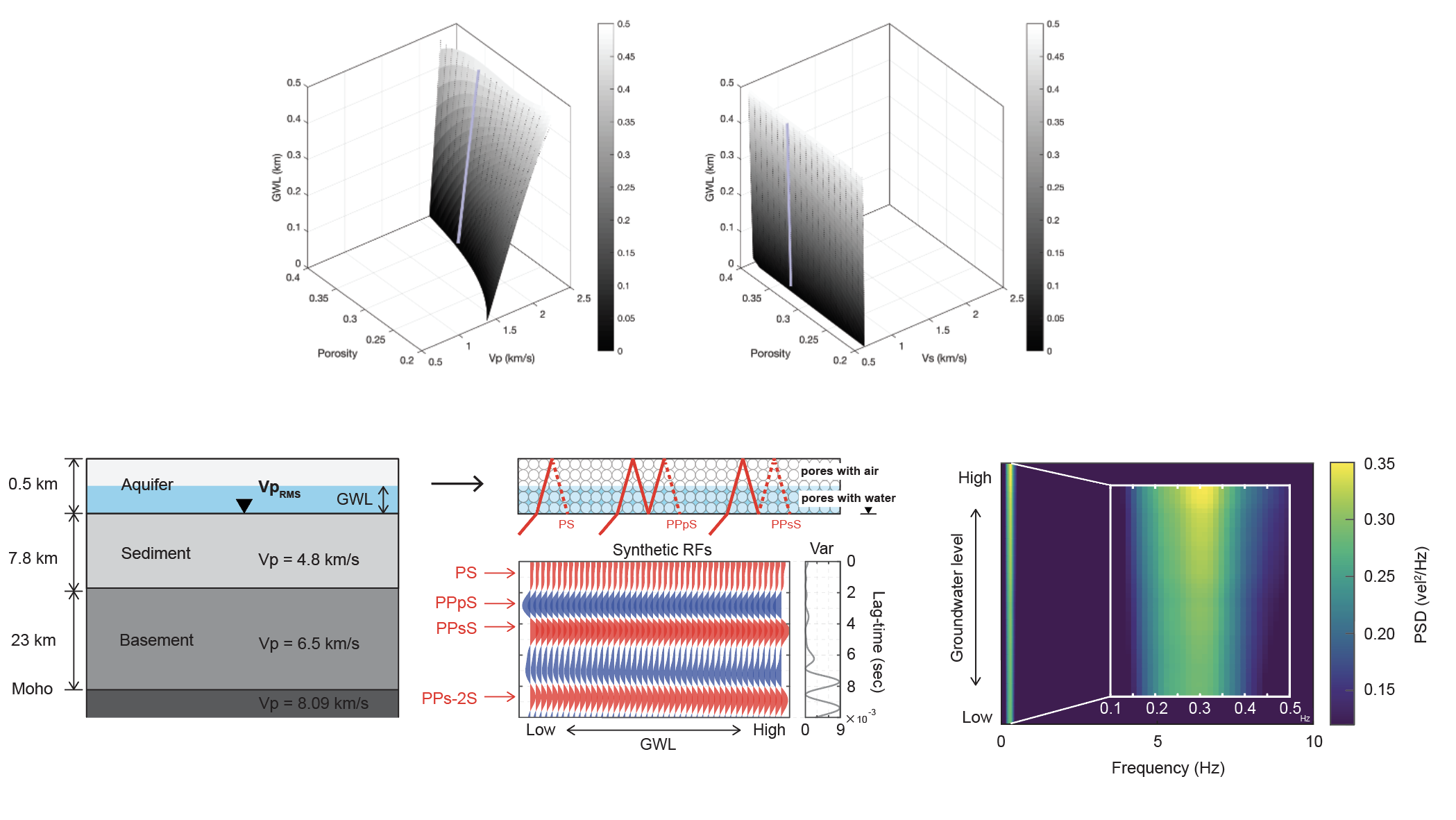 Autocorrelation of ambient noise, as well as RFs computed at a single seismic station show consistent correlations with GWLs on long timescales. A repeated analysis at a different GSN station (DWPW) in Florida shows very similar levels of correlations among dv/v, RF PSDs, and GWLs. Therefore, our work illustrates how even a single seismometer can be used to monitor groundwater level changes, which is particularly useful in aquifer systems lacking monitoring wells, and can complement other geophysical measurements from gravity or uplift/subsidence sensed data from satellites. The ongoing challenge is to map key hydraulic parameters (e.g., porosity and hydraulic conductivity) using a joint analysis of seismic and geodetic data, which leverages different sensitivities to the distribution of water with depth and this will open the door for constraining what fraction of extreme rainfall goes into recharging the groundwater.