The physical properties of subduction interfaces at convergent plate boundaries impact megathrust seismicity and arc volcanism but remain incompletely understood. Key questions remain regarding the physical properties and processes that control rupture initiation, propagation and termination. Thus, improving the resolution of seismic imaging at depths of several tens of kilometers could significantly advance our understanding of plate boundaries, including the width of the plate boundary and its internal physical properties. Subducting plates below 10‐km depth are primarily imaged using phases from teleseismic earthquakes at frequencies dominantly below 1 Hz, resulting in low‐resolution images compared to fault zone thickness. Our autocorrelation results image interfaces associated with the subducting oceanic plate at higher resolution than our teleseismic receiver functions, with increased coherence and sharper boundaries. Amplitudes suggest that seismic wave speed decreases with increasing depth within the low‐velocity zone, supporting lithologic rather than purely overpressure models for the zone in our region. Click to download the research paper. 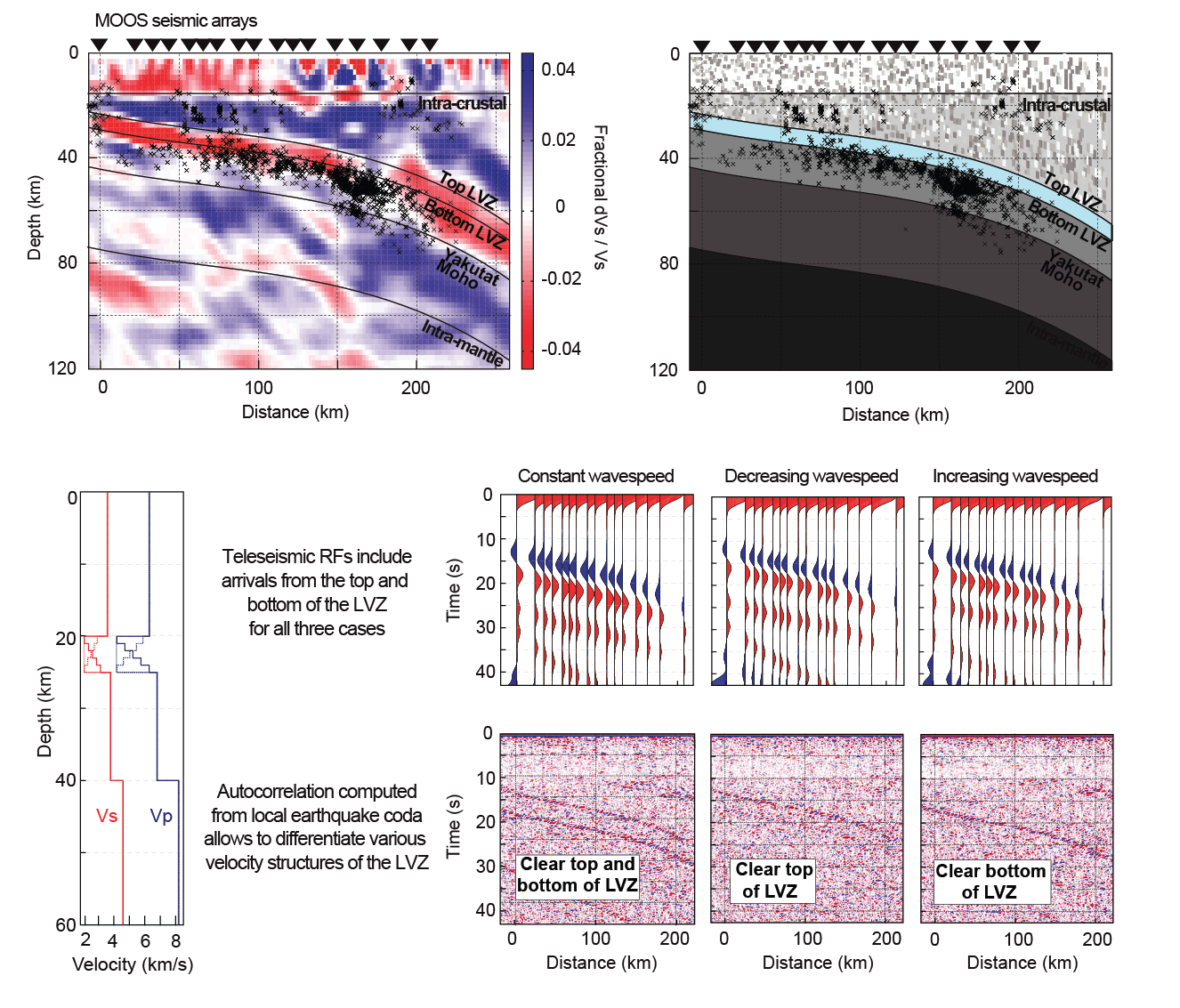 The distribution and movement of magma in the earth's crust has been a critical concern of geochemical and geophysical investigations for much of the past century; nevertheless, little consensus has emerged and controversial topics remain, such as, recently, the role of large magma chambers. We take advantage of recent advances in both seismic instrumentation (dense arrays) and seismic analysis to produce a high-resolution image beneath the Krafla geothermal field, Iceland. What make this particular site exceptional are encounters with rhyolitic magma in two drill holes, K-39 and Iceland Deep Drilling Project-1 (IDDP-1). These known magma bodies represent a unique calibration opportunity for surface geophysical measurements of magma distribution at depth. In our resulting images, we observe large amplitude reflections (bright spots) at a depth of 2.1 km which correlate with rhyolitic magma encountered in the IDDP-1 borehole. Although similarly bright reflectors at about 4 km correspond in depth to the top of an inferred magma chamber from previous seismic studies, the scattered reflectivity that persists beneath this deeper reflector argues for a distributed magma system rather than a large feeder chamber. Click to download the research paper 1 & 2.

From Trash to Treasure: Three-Dimensional Basement Imaging with "Excess" Data from Oil and Gas Explorations

Modern oil and gas seismic surveys commonly use areal arrays that record continuously, and thus routinely collect “excess” data that are not needed for the conventional common reflection point imaging that is the primary goal of exploration. These excess data have recently been recognized to have utility not only in resource exploration but also for addressing a diverse range of scientific issues. We process such discarded data from recent exploration surveys carried out in southeastern New Mexico. These have been used to produce new three-dimensional seismic reflection imagery of a layered complex within the crystalline basement as well as elements of the underlying crust. This enigmatic basement layering is similar to that found on industry and academic seismic reflection surveys at many sites in the central United States. Correlation of these reflectors with similar features encountered by drilling in northwestern Texas suggest that they may be part of an extensive, continental-scale network of tabular mafic intrusions linked to Keweenawan rifting of the igneous eastcentral Unites States during the late Proterozoic. Click to download the research paper. 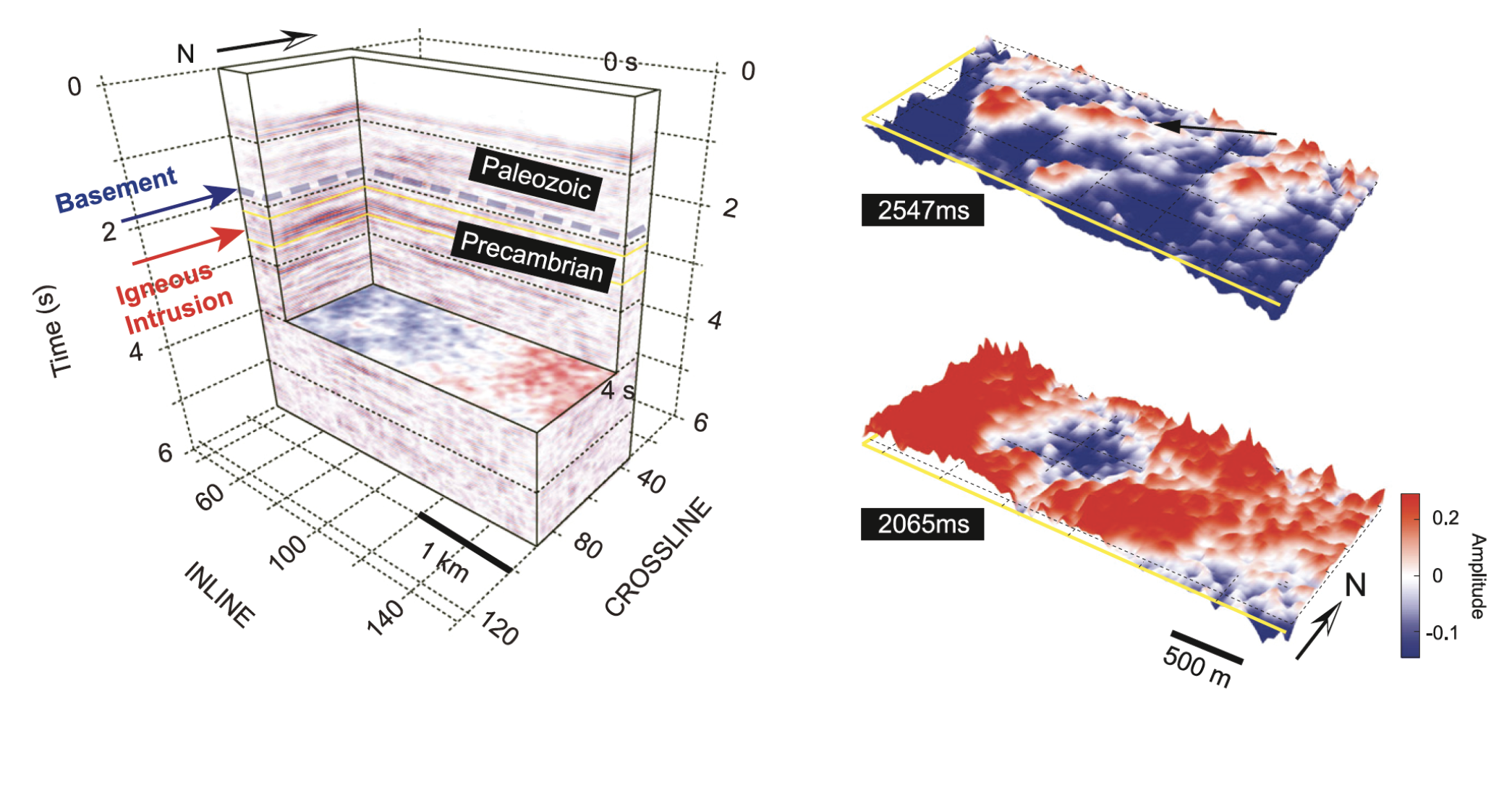 The anthropogenic contribution to the ambient seismic field has been addressed by only a few interferometry studies. Seismic interferometry applied to 120 hr of railroad traffic recorded by an array of vertical component seismographs along a railway within the Rio Grande rift has recovered surface and body waves characteristic of the geology beneath the railway. Direct P-wave arrivals have apparent velocities appropriate for the shallow geology of the survey area. Significant reflected P-wave energy is also present at relatively large offsets. These results confirm that train-generated vibrations represent a practical source of high-resolution subsurface information, with particular relevance to geotechnical and environmental applications. Click to download the research paper.