Sequencing Seismograms: A Panoptic View of Scattering in the Core-Mantle Boundary Region 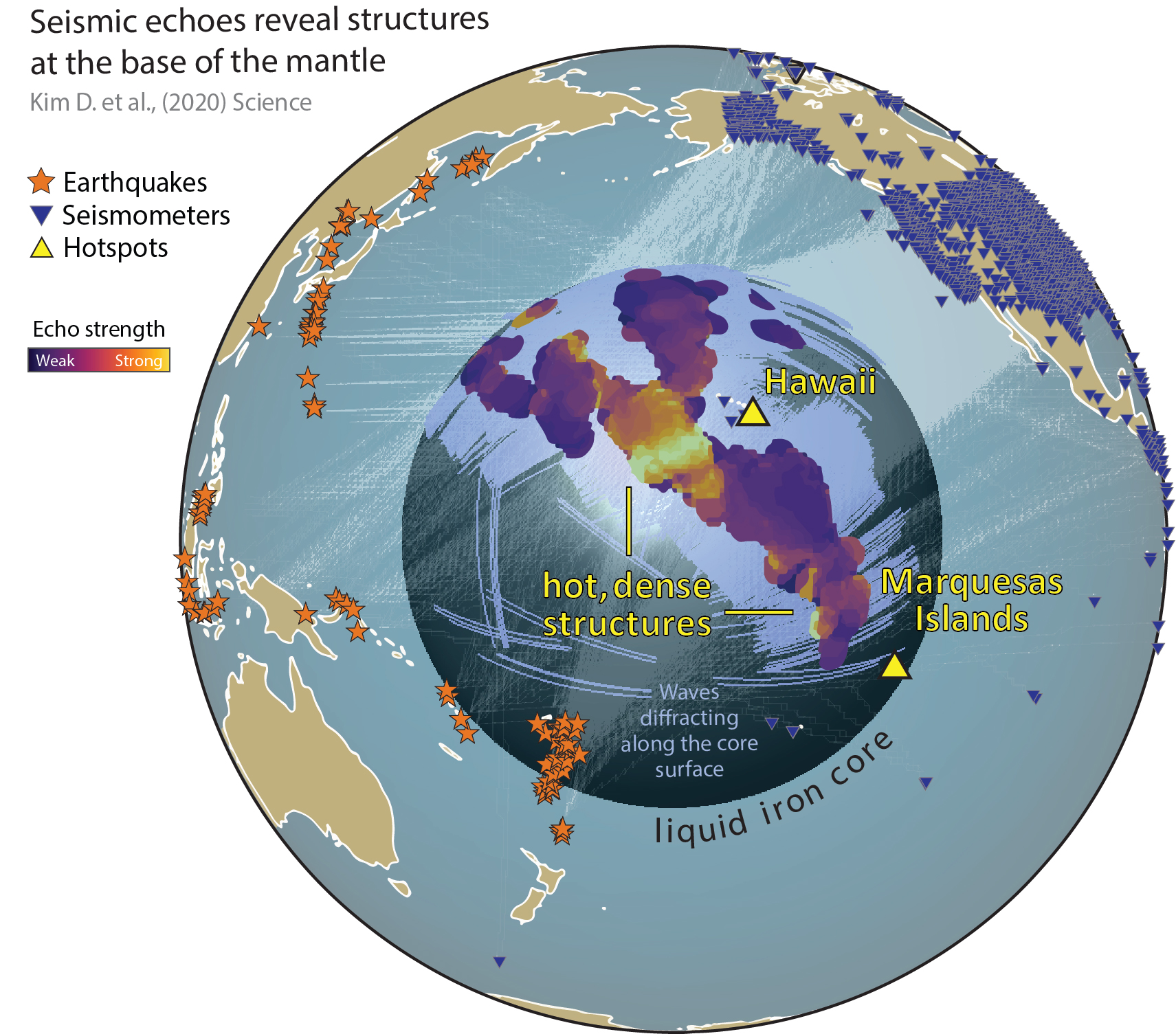 In the Earth's core-mantle boundary region, robustly identifying scattered waves has led to new discoveries. Seismically-imaged structure near the core-mantle boundary span a wide range of scales with ~5000 km Large Low Shear Velocity Provinces (LLSVPs) at one end, and ~100 km-scale ULVZs on the other. So-called mesoscale structures have also been found, including the Perm and Kamchatka anomalies, as well as unusually large ULVZs. ULVZs in particular are characterized by dramatically reduced velocities (e.g., ~30% and 10% for Vp and Vs, respectively). Although a recent study show LLSVPs and ULVZs are tied to isotopic heterogeneities measured in ocean island basalts, the origin of and relationships among those core-mantle boundary region structures largely remain controversial.

How Can We Detect ULVZs?

Many seismic phases are used in previous ULVZ studies. Because these phases (e.g., ScS, SPdKS, Sdiff, etc.) directly interact with the core-mantle boundary region, we are able to detect and model such anomalous structures. In this study we focused on shear waves diffracting along the core-mantle boundary (Sdiff), because they sample large areas at the base of the mantle. Waves scattered by heterogeneity in this region arrive after the main Sdiff phase, so the timing and amplitude of these Sdiff "postcursors" can constrain the location and nature of structures producing the scattering. Generating the large amplitude postcursors requires low-velocity compact anomalies based on two main reasons. First, low velocity anomalies can amplify the postcursors by focusing. Second, waves transmitted through the anomalies and delayed by them play a significant role producing such large amplitude postcursors. This is because what started out as the original Sdiff wavefront is delayed to produce postcursors, while what we interpret as the main Sdiff arriving before the postcursors is actually a relatively weaker phase produced by wavefront healing.

Traditionally, a standard procedure is to arrange waveforms by epicentral distance or azimuth in a targeted region to reveal trends in arrivals not predicted by models of the interior. Developed by our collaborators in Johns Hopkins University and Tel Aviv University, we made use of an unsupervised graph-based manifold learning algorithm, "the Sequencer", that orders objects to minimize dissimilarities between neighbors as well as globally across the entire sequence. In this study, the objects are Sdiff waveforms and dissimilarity is given by Wasserstein metric (also known as the Earth Mover Distance) between them. This new approach can be used to reveal the main trend present in a dataset without requiring any model at all. Other example objects include images, spectral data from distant stars, receiver functions, etc. Source code with more examples are available here. 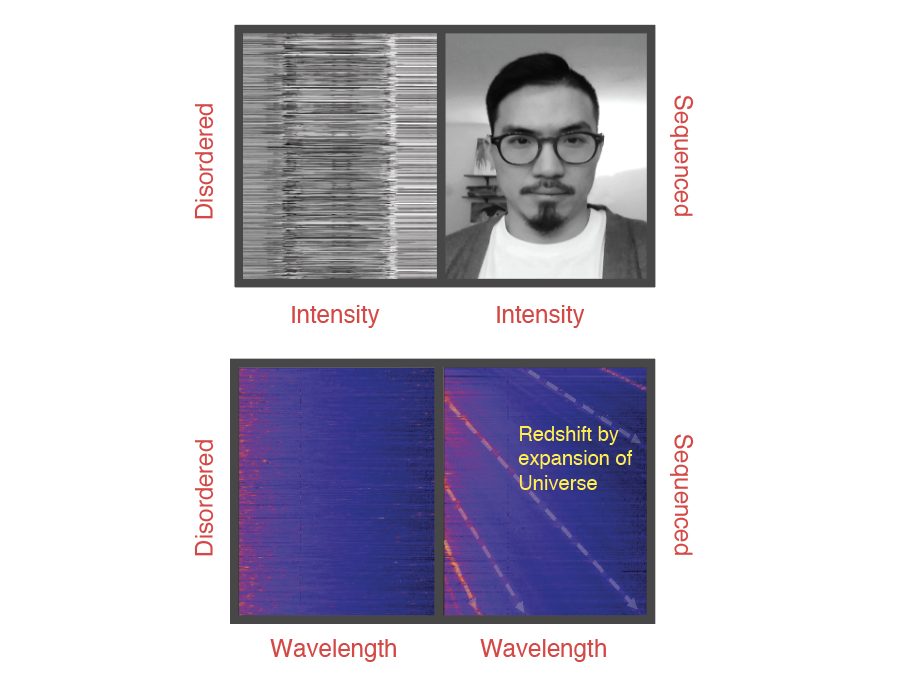 We conduct a large-scale systematic search for seismic waves scattered by heterogeneity near the CMB across the Pacific. We used Mw > 6.5 earthquakes recorded by broadband seismic stations operating during 1990-2018. Because energy reflected from the surface can complicate the identification of Sdiff postcursors, we restricted our attention to waveforms from events with hypocenter depth greater than 200 km. Source radiation pattern effects and highlighted signals not predicted by PREM are deconvolved from the raw data. This yielded a dataset of about 7500 transverse component waveforms. Ordering these waveforms by geometrical parameters such as azimuth or epicentral distance only makes sense locally and is not useful when working with data spanning large geographic areas.

Pervasive scattering in the Pacific

We used the Sequencer to optimally order our collection of Sdiff waveforms across the Pacific. We identify postcursors in more than 40% of waveforms, indicating that postcursors are far more common than previously thought. Radial gradients in velocities cannot on their own explain these pervasive postcursors, regardless of ordering. Postcursors are typically absent on paths that do not cross LLSVP boundaries, instead being confined either in their interior or well outside them. Waveforms with and without postcursors seem to coexist at sub-wavelength scales (~160 km) in most locations. Many of the postcursors in northern and western Pacific have large delay times, indicating that they originate from distant scatterers and may travel through complex structures. Intriguingly, nearly all Sdiff waves sampling near Hawaii and Marquesas show postcursors. 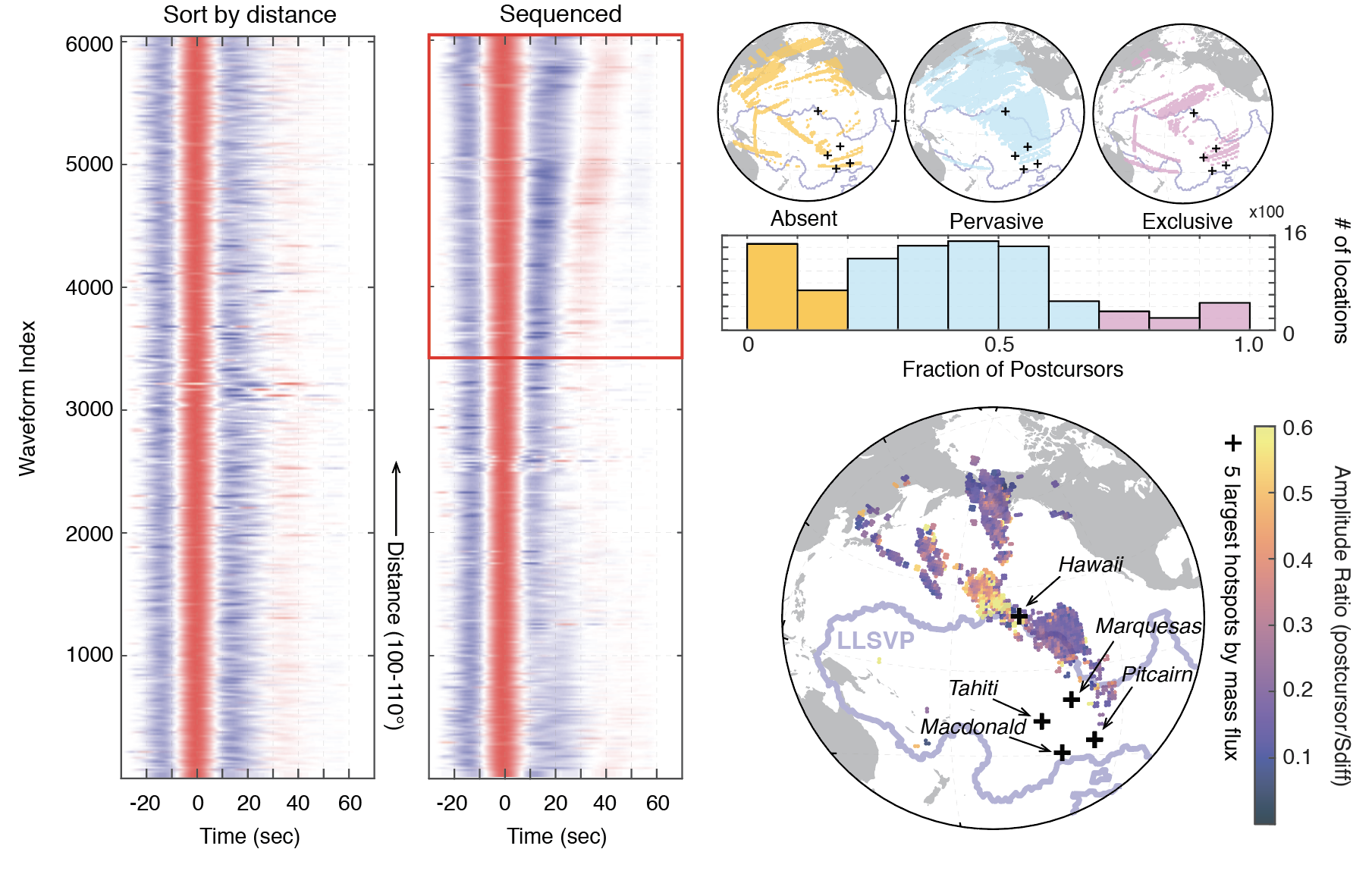 The amplitude of postcursors in the Hawaiian region appears to be three times larger than the typical amplitude found throughout the Pacific. By plotting each waveform’s position in the sequence at the midpoint of its diffracting path, we found that waveforms with postcursors appear to the northwest of Hawaii while those without appear predominantly to the southeast. Postcursor delay times gradually increase towards the center of the of the cluster whereas large amplitude postcursors (above ~0.5 w.r.t. the main Sdiff phase) are found mostly southward, near the northern edge of Pacific LLSVPs. The small number of weak postcursors detected to the southeast cluster does not show coherent geographic trends, suggesting that they were not produced by a structure of the type located beneath Hawaii. We also observed an anti-correlation between postcursor delay time and amplitude in the region, consistent with expectations for a localized wavespeed anomaly. 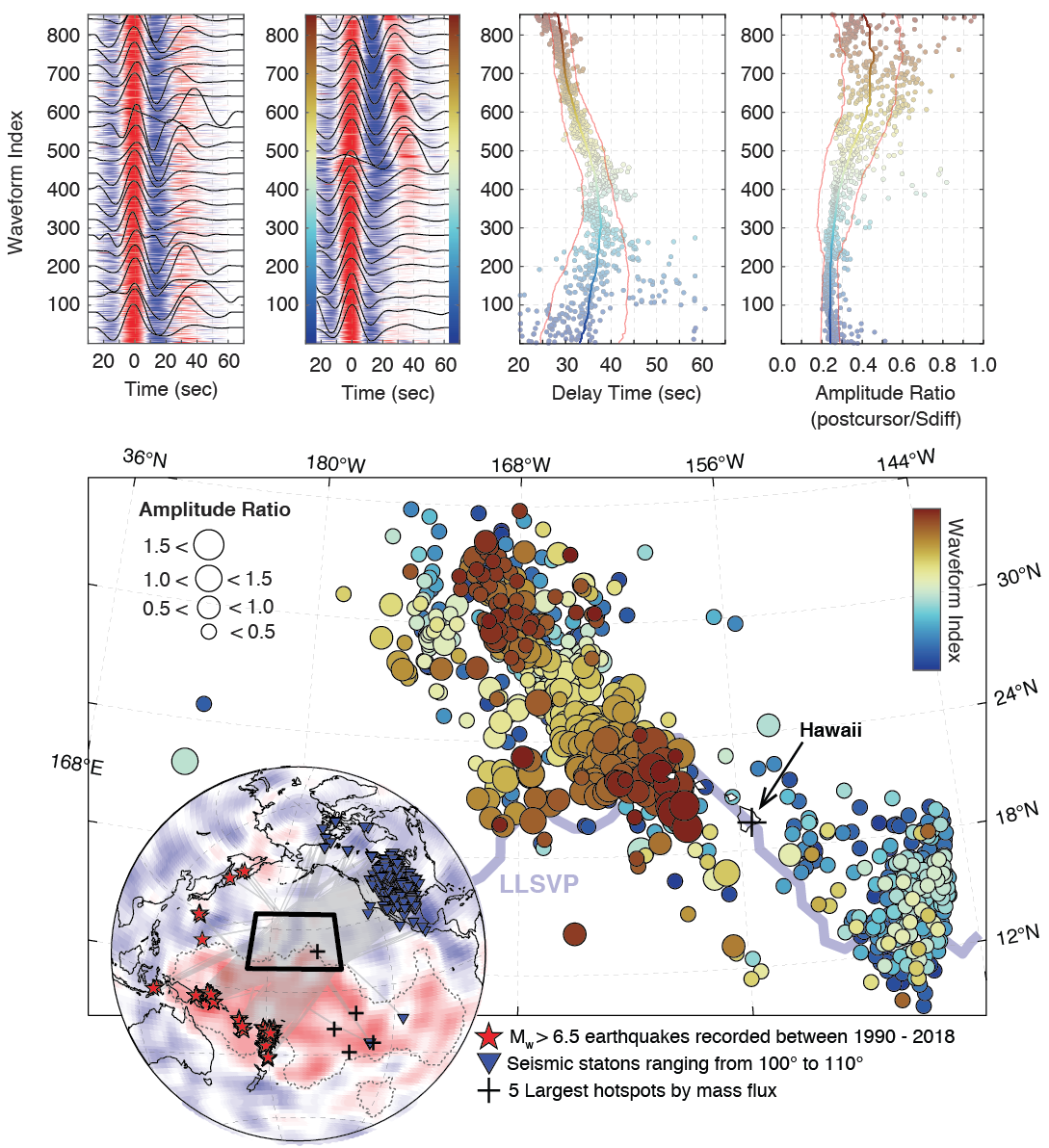 The anti-correlation between postcursor delay time and amplitude seen from Hawaii allows to use the presence of such a correlation as a detector of localized structures. At each location across the Pacific basin, we estimated the slope and amplitude of the linear fit to the delay time and log-amplitude of postcursors with diffracting paths located within 5° of the location. As expected, we found steep negative slopes in the vicinity of Hawaii, across a region that is substantially larger than anywhere else in the Pacific basin. In addition, we also detected a similar signature, with a slightly gentler slope, close to the Marquesas Islands, indicating a previously unidentified local wavespeed anomaly. 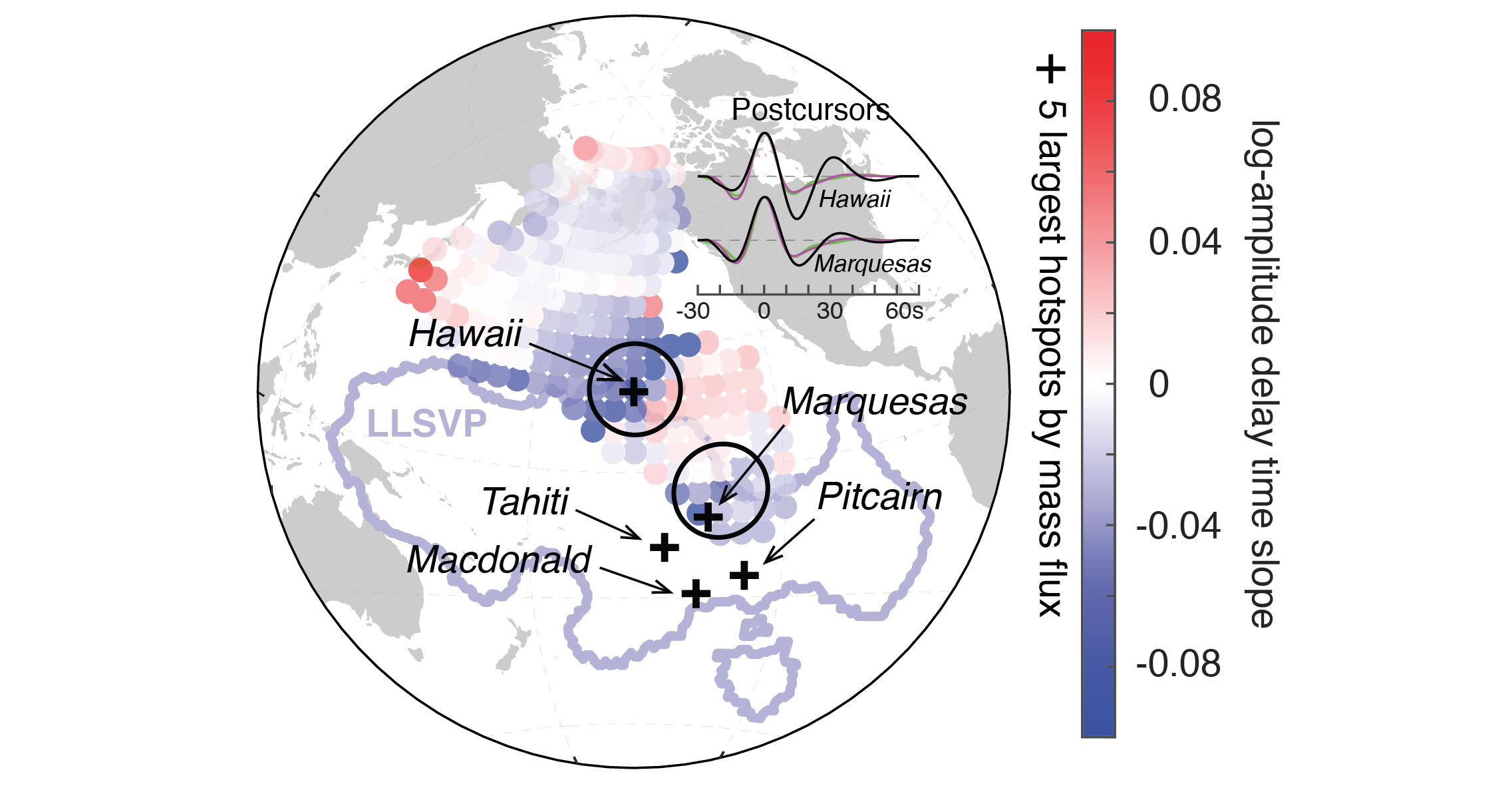 Our systematic postcursor search in the Pacific basin, interpreted with insights from waveform simulations, reveals that heterogeneity capable of producing postcursors is widespread in the CMB region. We found that strong postcursors exhibit an anti-correlation between delay time and log-amplitude which can be detected locally. The two strongest postcursor signals in the Pacific are related to Marquesas and a broad region near Hawaii. The previously unknown localized anomaly near Marquesas has dimensions similar to that of a mega-ULVZ. The anomaly beneath Hawaii is unique in the Pacific basin, producing postcursors that can only be explained by a structure either substantially larger than a mega-ULVZ or by a plume conduit. Weaker postcursors are observed throughout the Pacific basin and do not exhibit a correlation between delay time and amplitude. They are best explained by scattering from laterally-abrupt edges of LLSVPs (5% VS contrast).